The pension freedoms announced in 2014 now mean that many investors will be viewing their retirement fund differently than before. Whilst for many, the pension fund will still be their main source of income, it is likely to remain invested for a much longer term. There are, of course, a myriad of investment options and no single solution is likely to be used in isolation. In this article we look at the use of ‘kick-out’ structured products with a view to providing capital growth which, in conjunction with other investments can then be used to fund a retirement income.

Having been exceptionally popular with both advisers and investors in recent years, ‘kick-out’ products, also known as auto-calls, typically offer the potential for a fixed percentage annual return payable at maturity of the plan. They have a maximum term but allow for an early maturity if market conditions are favorable. If market conditions do not allow for a ‘kick-out’ in one year, the investment will continue into the next year, accumulating the potential gain for each year it is active. Different products offer different payoff profiles, and so an investor may blend products together into a ‘mini-portfolio’ to diversify not only return potential and risk, but also maturity date potential.

A glance at a few of the kick-out products currently available offers a view into the potential gains available.

The chart below plots the potential early maturity dates of the three products if they were to strike at the time of writing, next to FTSE performance over the last 5 years and illustrates how the three products could be used together to potentially produce returns staggered across different years. 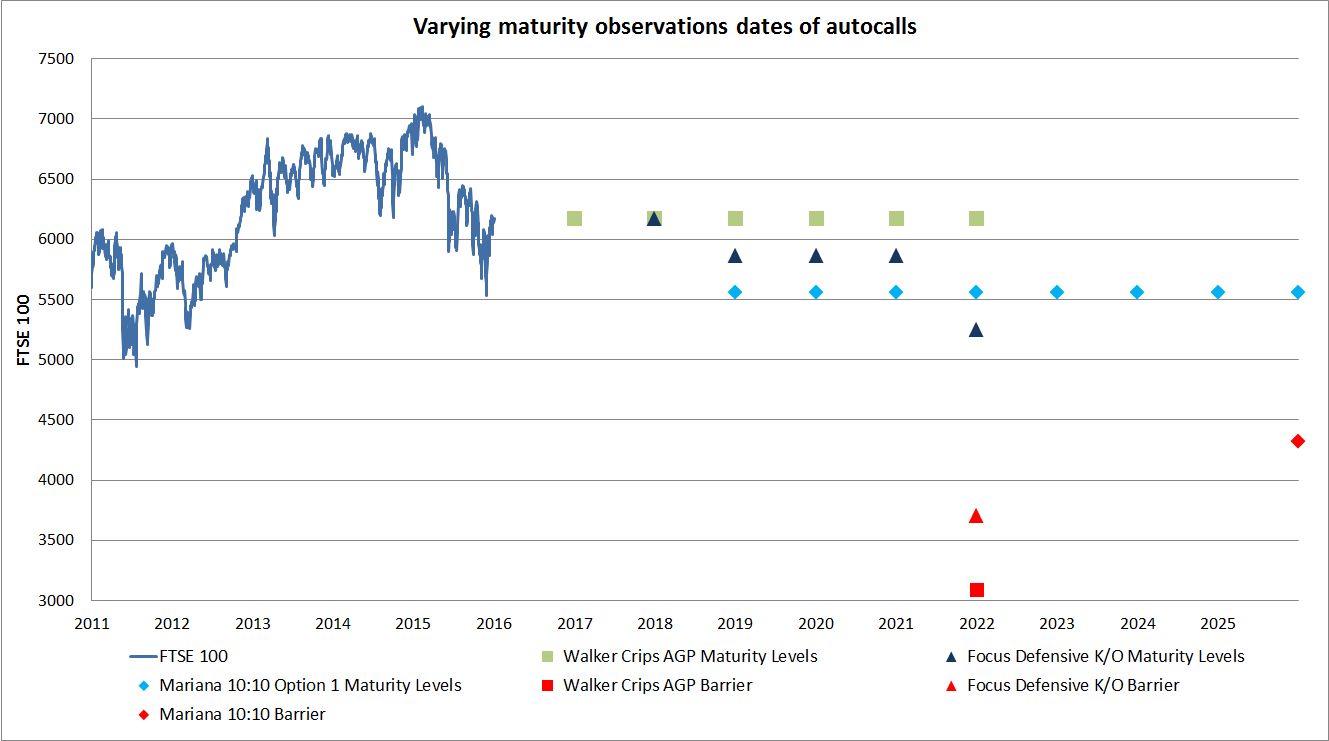 Assuming continued counterparty solvency, if each product were to mature at its first potential maturity date, they would respectively return the relevant investment portion plus a 10% gain in 2017, a 17% gain in 2018 and a 23.4% gain in 2019. It should be noted that the coupons are fixed and do not compound and of course it is very possible that they do not mature in that order but the longer they are in force the greater the eventual return will be – provided a positive maturity is eventually triggered.

For investors looking to fund income at retirement, this may be a novel solution, for part of a portfolio, providing attractive returns in defined circumstances. It is important to appreciate that investing in structured products involves the acceptance of counterparty risk and if one of the relevant banks fails a significant portion of the capital could be lost. By investing in a portfolio of such investments counterparty risk is diversified thereby reducing, albeit not removing, this risk.

As ever, it is important that investors read the investment literature thoroughly and if there are any doubts about the suitability of a particular, proposed course of action they should seek appropriate advice.

Not all Pension/SIPP providers can yet facilitate structured products on their platform, so it is important to check your providers functionality and limitations before applying.
To access this website you must read and agree to our Terms & Conditions