The Danger of Assumptions on Structured Products

The latest performance figures for structured products maturing in the first quarter of this year throw up some positive results which show further evidence that the sector should not be dismissed. One plan manager that made an appearance with one of the best-performing products is Keydata, which will be surprising for some.

As with a collective investment, it can be wrong to assume that when a product provider fails investors lose their original capital. This is potentially the case when the counterparty fails but not the plan manager when an alternative plan manager can take over the book of business. This is in fact what happened with Keydata when it collapsed in 2009, with Merchant Capital taking over the book of business and this subsequently being taken on by Reyker Securities.

A common misinformed opinion is that the collapse of Keydata was somehow linked to their structured product business, but it was entirely related to the US life settlement backed investments they produced. The problem is with any disaster, financial or otherwise, most of the blame will fall on what people assume to be the cause based on their preconceptions, rather than what is actually the cause. This often leads to wide-sweeping assumptions being made that are not representative of the bigger picture or the facts.

As a financial adviser, the job involves careful consideration of the facts and making an assessment based on those. There is little room for speculation or assumptions. Taking a look at the latest maturity results of structured products distributed through the independent financial adviser space, using data from StructuredProductReview.com, it is evident that the sector warrants a further look. The average annualised return of the 103 products linked solely to the FTSE 100 that matured in the first three months of the year was 6.88 per cent over an average term of 4.14 years. 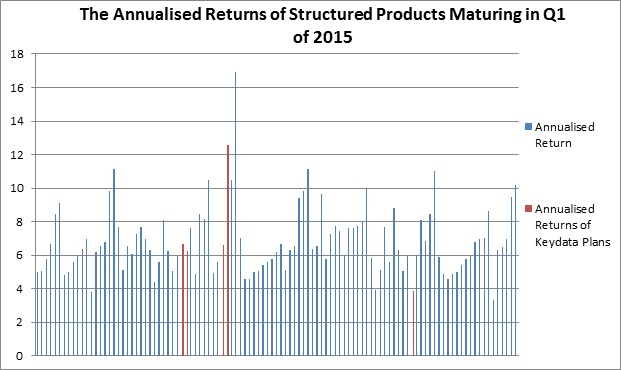 Three out of the five Keydata products that matured in this period delivered around that 6.88 per cent return mentioned above, with one massively outperforming and another underperforming, but still returning 3.7 per cent per year.

The stand-out product ranks as one of the best performing of the entire dataset in the quarter. This was the Keydata Dynamic Growth Plan Plus 14 – Option 2, a six-year plan that offered the potential for growth at maturity equivalent to 10 times any rise in the FTSE 100, subject to a maximum investment return of 103.5 per cent of the investor’s original investment. The plan would return original capital in full at maturity, unless the index fell by more than 50 per cent below its initial level at any point during the investment term and failed to recover by the maturity date.

The plan made the maximum return, 103.5 per cent of the investor’s original capital, which equated to an average annualised return of 12.6 per cent. This is very impressive in reference to other investments and within the sector itself. This is not a one off, as both of the previous two iterations of this product also made their maximum returns. Dynamic Growth Plan Plus 12 – Option 2 delivered an average annualised return of nearly 11 per cent over the six-year term and Option 2 of issue 11 delivered 11.3 per cent annually over the six-year term. No version 13 existed.

While the old adage of past performance is not a guide to the future always rings in every adviser’s mind, transparency of the sector’s performance can help dispel some of the myths and assumptions around structured products. Providing maturity figures can allay some advisers’ concern around using the products due to a lack of performance data. Structured products do exactly what they say on the tin and their defined outcomes make them a valuable addition to client portfolios.

A version of this article was first published by Fundweb.co.uk.