“I contend that for a nation to try to tax itself into prosperity is like a man standing in a bucket and trying to lift himself up by the handle.”

If you’re awakening from a decade long sleep, you could be forgiven for being aghast at the state of the nation. Not only is the reality TV show X-Factor still going, but the global economy has been disfigured with Government and Central Bank interventions seemingly defying economic principles.

Freakonomics was published in 2005, applying economic theory to a vast array of social subjects. This was probably the last time economics followed fundamental principles to make sense of the world.

In 2007, the bursting of the US housing bubble precipitated an unprecedented withdrawal of liquidity from global markets, triggering a global financial crisis. In efforts to avert a crisis on parallel to the Great Depression of the 1930’s, Governments and Central Banks implemented traditional policy levers at first, and latterly aggressively applied non-traditional policy measures.

Abenomics has become a much used phrase since Shinzo Abe was elected Prime Minister of Japan in 2012. Abenomics encapsulates some of the most ambitious and far reaching set of policy arsenal ever deployed by a developed nation. In addition to conventional monetary and fiscal policy, quantitative easing and supply-side reforms have been used by different countries as stimulus to keep fragile economies afloat.

Economic textbooks used in schools advise: debt to GDP ratios of over 200% are unsustainable; quantitative easing is inflationary rather than providing sustainable growth in the long run; fiscal policy takes time to filter through to the economy and may have disproportionate effects on subsets of society; rational investors buy debt that promises a positive return on capital. A final red flag for concern is consideration of ‘helicopter money’, where a jump in public spending or a tax cut that is financed by a permanent increase in the money stock. Worryingly, this is no longer consigned to the back pages of textbooks, but appearing on the front pages of valued publications.

With major market indices trading sideways over the past 12 months, there is seemingly a pause in breath. Markets have been driven more by Government and central bank policy rather than fundamentals and the next developments have the potential to be a tipping point.

There is a host of forthcoming events with the potential to contribute to market volatility and uncertainty.

Japan has just announced a delay in its contentious sales tax until 2019 – backtracking on its unique course of fiscal discipline. In the US, markets commentators are increasingly talking up the potential for a rate hike by the US Federal Reserve this month. In the UK, the potential exit of Britain from EU membership remains close to call. And, emerging markets continue to be embroiled in military coups, impeachments and corruption.

The RHFS Diversified Strategy Fund, managed by Lowes Financial Management, invests globally and aims to provide capital growth. In the face of economic and political uncertainty, the fund has increased its short term position in cash reserves to around 10% to provide protection from the impact of volatile markets. However, this isn’t a case of shutting up shop, but keeping powder dry. Cash can be deployed tactically when investment opportunities arise at attractive valuations.

In addition to third-party mutual funds, the Diversified Strategy Fund invests in stock market linked structured investments. The long-term benefits of structures are that they allow access to defined returns and capital barrier protection, requiring markets to fall by 40% or 50% before capital is at risk on many of these products. Economic and political uncertainty allows us to identify short-term pricing opportunities on the secondary market in structured products, providing increased potential for returns to surpass those of alternative mutual funds. 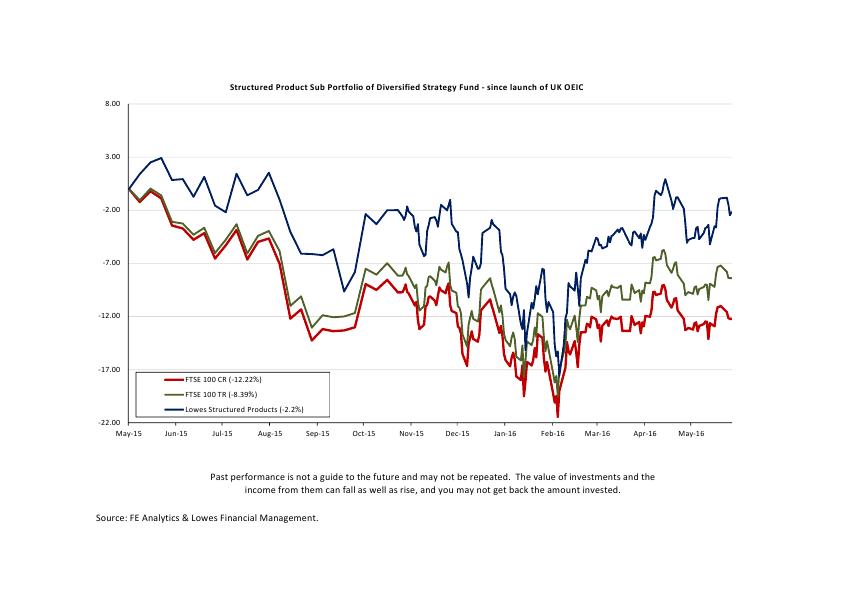 The Brexit referendum on 23rd June and of course other political factors discussed earlier means that uncertainty in markets will be upon us for a while. This will create more tactical buying opportunities. Should markets retract prior to referendum, the price of structured products linked to the FTSE 100 available on the secondary market is likely to fall, providing potentially attractive entry points into these investments.

Lowes takes a cautious long-term approach to protecting client assets and providing consistent returns, while also retaining flexibility to make investment decisions that take advantage of future policy decisions and market sentiment. Lowes has relied upon this investment philosophy for over 45 years, and in another decade it will likely be sticking to these sound investment principles to successfully manage investments in volatile times.
To access this website you must read and agree to our Terms & Conditions